Compared to $1.5million a box for Le Chocolate Box, Ferrero Rocher isn't the most expensive chocolate.

Forbes estimated that Ferrero Rocher as the company earns 10% from each chocolate sold meaning 90% of the price you paid was used to make a Ferrero Rocher.

So, why is Ferrero Rocher so expensive? The cost to make an expensive Ferrero Rocher is divided into purchasing ingredients, hiring staff to manufacture the chocolate giving a "golden experience", testers to ensure high quality in taste and spot defects, and finally, marketing and distribution costs which are typically around 11% based on other chocolate.

Ferrero, who makes Nutella and Rocher, used around 25% of the hazelnut's global supply.

While ingredients to make a Ferrero Rocher are commonly found, Ferrero had to source more sustainable options, especially for hazelnuts to maintain its cost. Each jar of Nutella contains about 50 hazelnuts while each Ferrero Roche used 1 hazelnut.

Making of Ferrero Rocher Being A Secret

Introduced in 1982 after 5 years of development, Ferrero Rocher was marketed as “the golden experience” of premium chocolate confectionery. Ferrero Rocher has one of the most secretive production processes, almost comparable to NASA and Coca Cola.

No smartphones or notebooks allowed inside the production facilities.

In 2011, the chocolate maker allowed journalists to tour its plant in Alba, Italy, for the first time in the company's 65-year history.

As of 2015, few journalists have ever been invited to visit and the production in the Alba factory totals 24 million Ferrero Rochers a day

In 2018, the chairman did his first-ever interview with an American media outlet.

Washington Post's Sarah Kaplan reported that the Ferrero Group previously banned tours of its factories for fear of "industrial espionage," as the designs of its equipment and Nutella recipe are closely guarded secrets.

The sweet is produced by machinery.

According to The Guardian, one anonymous executive compared the company's security measures to those of NASA. In fact, DailyMail reported that the founder wrote its famous recipe into Arabic and locked it in a vault in Cairo.

Another cost is the amount of testing or quality check performed.

Ferrero Rocher hired senior testers to ensure the taste and quality of each Ferrero Rocher. Senior taster Stefania Agnelli explained that to be selected they must correctly identify the flavors of sweet, bitter, salty, and umami.

Testers are also tasked to find the smallest cracks in the wafers.

'We are manic about the quality,' one of the executives insists. 'It has to be perfect'.

Dozens of professional 'tasters' all over the world have what sounds like a dream job.

While Ferrero making 10% of profit does not sound a lot, it made Giovanni Ferrero, CEO of Ferrero, the richest man in Italy. Forbes said that Ferrero sits on a pile of billions in cash but it is still a risky endeavor.
At its core, the chocolate business is a branding game. Every purveyor sells roughly the same commodities. Yet by some alchemy or marketing savvy, Ferrero's goods have traditionally commanded a higher devotion. Nutella especially so.
Ferrero even bought Nestle's U.S. candy business for about $2.8 billion. It was estimated that Ferrero produces around 3.6 billion Ferrero Rochers are sold each year in over 40 countries

On the other hand, Guardian reported that Ferrero UK only paid £110,000 of tax, due to a £334m “cost of sales” charge to Ferrero’s holding company in low-tax Luxembourg.

Robert Leach, a tax accountant, said “Basically, this is chocolate and hazelnut wrapped in some fancy packaging – it should not cost much to make. So I would ask the company, what is costing £334m? I would ask Giovanni Ferrero, ‘Why are you still selling chocolate in the UK, when you don’t make a profit?’” 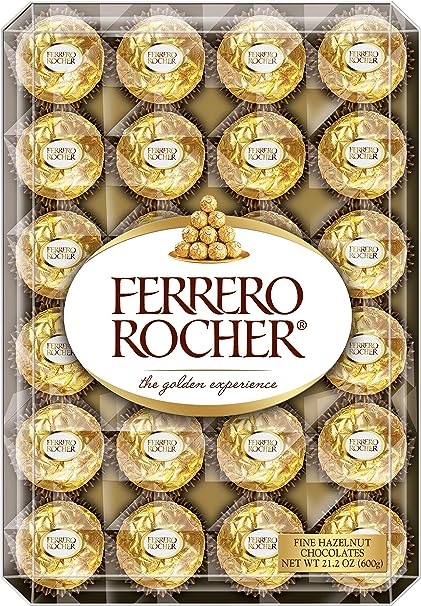 As someone who bought many boxes of Ferrero Rocher as gifts, everyone loves receiving the gift box showing the golden wrapped chocolate. Almost every year near festive giving seasons like Valentine's Day or Christmas, hazelnut chocolates will be promoted heavily.