Italy has a fast-growing vegan population in Europe; about 10% of Italians are vegan or vegetarian.

Italy is surprisingly vegan-friendly. Back before the industrial revolution, many Italians were vegan or vegetarian, simply because they couldn’t afford the luxury of meat.

They developed a rich food culture based on soups, casseroles, pizza, and hearty dishes made with legumes and even delicious gelato.

So, if you’re ready to eat your way across the country, here are some key things to know before you head out on your vegan food adventure in Italy.

Let’s take a look at 10 of the best choices of vegan food you can find in Italy. Caponata is a classic Sicilian side typically made with fried eggplant. This sweet-and-sour eggplant jam can also incorporate raisins, tomatoes, onions, olives, capers, vinegar, and fresh herbs. Make eggplant caponata ahead of time if you can to let the flavors intensify. Panelle is a Sicilian fritter made from chickpea flour and other ingredients. They are popular street food in Palermo and are often eaten in a bread roll, like a sandwich, with a little salt and some freshly ground pepper.

They are best eaten hot when they are crunchy and tender at the same time. So make sure you don’t wait too long before eating them! They can be eaten plain or with bread. Pappa al Pomodoro is a thick Tuscan bread soup typically prepared with fresh tomatoes, bread, olive oil, garlic, basil, and various fresh ingredients. It is usually made with leftover bread and can be served hot, room temperature, or chilled. Ribollita Toscana is one of Tuscany’s many famous bread soups. Typically containing cavolo nero, savoy cabbage, cannellini beans, and stale bread, the dish is part of the tradition of humble, thrifty dishes, and will likely have contained whichever vegetables were available.

Ribollita means ‘reboiled’, and an essential step to this recipe is to let the soup chill before reheating later for added depth of flavor. Best made in big batches to feed yourself for the whole week, the soup will grow tastier with each day that passes! Focaccia is the signature bread of Liguria, a region of north-western Italy, and is enjoyed as a starter, an accompaniment to a meal or as a snack.

This Ligurian bread has made its way around the world, and it's no surprise that It's delicious either on its own, dipped in sauce, or with a spread. Farinata di Ceci is a type of thin pancake or crepe made from chickpea flour. It originated in Genoa and later became a typical food of the Ligurian Sea coast, from Nice to Elba island. This dish is one that is found on the table of many families in Italy, where garlic, olive oil, and red chili rarely go amiss. The original recipe is from Naples, where its name is often pronounced by locals in one single breath.

With so few elements to the recipe, the key is in the quality of the ingredients and the precision of the process.

Finely chopped garlic and fresh red chili are fried in extra virgin olive oil until golden. The garlic is then removed and the mixture is folded into a long variety of pasta (such as spaghetti, linguine or vermicelli). You can also read our post on the history of pasta. Pane Carasau is a traditional flatbread from Sardinia, the second-largest island in the Mediterranean Sea. It is thin and crisp, usually made by taking baked flatbread (made of durum wheat flour, salt, yeast, and water), then separating it into two sheets which are baked again.

The recipe is very ancient and was conceived for shepherds, who used to stay far from home for months at a time. Pane Carasau can last up to one year if it is kept dry. The bread can be eaten either dry or wet (with water, wine, or sauces). Carciofi Alla giudìa is among the best-known dishes of Roman-Jewish cuisine. The recipe is essentially a deep-fried artichoke and originated in the Jewish community of Rome.

Deep-fried artichokes may be one of the best examples of the Roman-Jewish mastery of deep-frying techniques. Shatteringly crisp outside, tender within, and as pop-able as potato chips, this is the way we all should usher in spring.

Why this recipe works:

Please note that  Olive oil is more traditional, and will give more of the characteristic Mediterranean flavor, whereas neutral oils like vegetable or canola oil will let more of the pure artichoke flavor shine through. 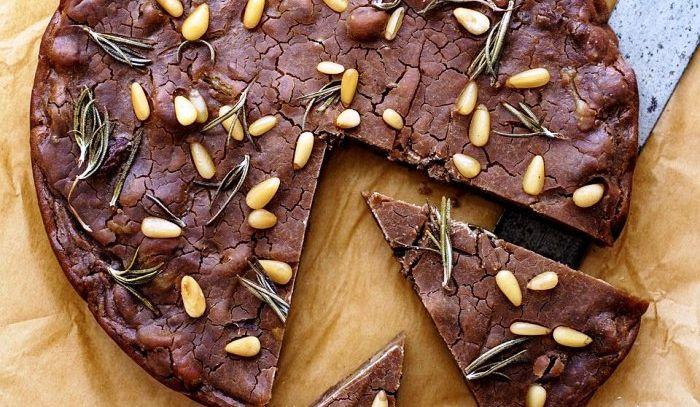 A traditional dish from the northern and central Italian Apennines made of chestnut flour, olive oil, salt, and water. Today, although Pattona is mainly thought of as a dessert course or a sweet snack, in the past it featured heavily in the local diet of this mountainous area as the main dish.

There are many regional varieties of the dish but the popular version is no more than a centimeter thick, compact, and dense-looking but soft and creamy to the bite. Pattona is an autumnal specialty, revered in every autumn chestnut fair of the region.

Italy is a food lovers’ dream destination, even for vegans, it’s no different.

Italy is great for vegans because there are naturally so many plant-based options already part of Italian cuisine.

It's also easy to replace dairy or meat in so many delicious dishes. Of course, Italian gastronomy varies from one region to the next but more and more restaurants are adding vegan options to their menus.

Food is such an essential part of the Italian culture and there’s no better way to get under the skin of the country by eating, cooking, and sharing food the local way.

https://www.intrepidtravel.com/adventures/italy-for-vegan-travellers/
https://www.livingalifeincolour.com/recipes/focaccia-liguria/
https://www.greatitalianchefs.com/features/10-best-vegan-italian-dishes
https://www.cookinglight.com/recipes/eggplant-caponata
https://www.alimentipedia.httpit/panelle-palermitane.html
https://www.seriouseats.com/recipes/2015/03/roman-jewish-fried-artichokes-carciofi-alla-giudia-recipe.html
Efforts have been made to get the information as accurate and updated as possible. If you found any incorrect information with credible source, please send it via the contact us form
Author: Lady M.A.
Fall in love with Italy, the land of renowned arts, architecture, music and food.